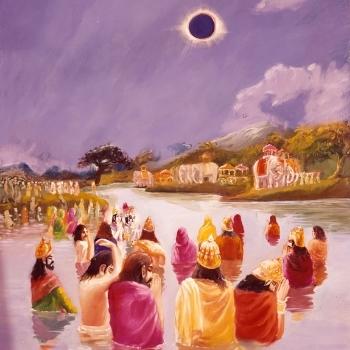 Evant Date:
2022 May 26 @ 04:30 AM
Description:
Sri Yudhishthira Maharaj said, "Oh Janardana, what is the name of the Ekadasi that occurs during the dark fortnight (krishna paksha) of the month of Jyeshtha (May-June)? I wish to hear from You the glories of this sacred day of Hari. Please narrate everything to me"
Lord Sri Krishna said, "Oh king, your inquiry is wonderful because the answer will benefit the whole human society. This Ekadasi is so sublime and meritorious that even the greatest sins can be erased by its purity.
"Oh great saintly king, the name of this unlimitedly meritorious Ekadasi is Apara Ekadasi. Whoever fasts on this holy day becomes famous all over the universe. Even such sins as killing a brahmana, a cow, or an embryo; blasphemy; or having sex with another man's wife are completely eradicated by observing Apara Ekadasi.
Oh king people who bear false witness are most sinful. A person who falsely or sarcastically glorifies another; one who cheats while weighing something on a scale; one who fails to execute the duties of his varna or Ashrama (an unqualified man's posing as a brahmin, for example, or a person's reciting the Vedas wrongly); one who invents his own scriptures; one who cheats others; one who is a charlatan astrologer, a cheating accountant, or a false Ayurvedic doctor. All these are surely as bad as persons who bears false witness, and they are all destined for hellish punishments. But simply by observing Apara Ekadasi, all such sinners become completely free of their sinful reactions.
Warriors who fall from their kshatriya-dharma and flee the battlefield go to a ferocious hell. But, Oh Yudhishthira, even such a fallen kshatriya, if he observes fasting on the Apara Ekadasi, is freed of that great sinful reaction and goes to heaven. That disciple is the greatest sinner who, after receiving a proper spiritual education from his spiritual master, turns around and blasphemes him. Such a so-called disciple suffers unlimitedly. But even he, rascal though he be, if he simply observes Apara Ekadasi, can attain to the spiritual world.
Listen, Oh king, as I describe to you further glories of this amazing Ekadasi. The merit attained by one who performs all of the following acts of piety is equal to the merit achieved by one who observes Apara Ekadasi: bathing three times daily in Pushkara-kshetra during Kartika (October-November); bathing at Prayag in the month of Magh (January-February) when the sun is in the zodiac of Capricorn; rendering service to Lord Shiva at Varanasi (Benares) during Shiva-ratri; offering oblations to one's forefathers at Gaya; bathing in the sacred Gautami River when Jupiter transits Leo (Simha); having darshan of Lord Shiva at Kedarnatha; seeing Lord Badrinath when the Sun transits the sign of Aquarius (Kumbha); and bathing at the time of a solar eclipse at Kurukshetra and giving cows, elephants, and gold there in charity. All the merit one gets from performing these pious acts is gained by a person who observes the Apara Ekadasi fast. Also, the merit attained by one who donates a pregnant cow, along with gold and fertile land, is attained by one who fasts on this day.
In other words, Apara Ekadasi is an axe that cuts down the fully matured forest full of trees of sinful deeds, it is a forest fire that burns sins as if they were kindling firewood, it is the sun blazing before one's dark misdeeds, and it is a lion stalking the meek deer of impiety. Therefore, Oh Yudhishthira, whoever truly fears his past and present sins must observe Apara Ekadasi very strictly. One who does not observe this fast must be born again in the material world, like one bubble among millions in a huge body of water, or like a small ant among all other species. Therefore one must faithfully observe the sacred Apara Ekadasi and worship the Supreme Personality of Godhead, Sri Trivikrama. One who does so is freed of all his sins and promoted to the abode of Lord Vishnu.
Oh Bharata, for the benefit of all humanity I have thus described to you this the importance of the holy Apara Ekadasi. Anyone who hears or reads this description is certainly freed from all kinds of sins, oh best of saintly kings, Yudhishthira. Thus ends the narration of the glories of Jyeshtha-krishna Ekadasi, or Apara Ekadasi, from the Brahmanda Purana.
NOTES:
1. Pushkara-kshetra, in western India, is the only place on Earth where a bonafide temple of Lord Brahma is to be found. 2. The Vedas declare, narah budbuda samah: "The human form of life is like a bubble in water". In water, many bubbles form and then suddenly burst a few seconds later. Thus if a person does not utilize his rare human body to serve the Supreme Personality of Godhead, Sri Krishna, his life has no more value or permanence than a bubble in water. Therefore, as the Lord herein recommends, we should serve Him by fasting on Hari-vasara, or Ekadasi.
In this regard, Srila A.C. Bhaktivedanta Swami Prabhupada writes in the Srimad Bhagavatam (SB 2:1:4 purport) : "The great ocean of material nature is tossing with the waves of time, and the so-called living conditioned are something like foaming bubbles, which appear before us as bodily self, wife, children, society, countrymen, etc. Due to a lack of knowledge of self, we become victimized by the force of ignorance and thus spoil the valuable energy of human life in a vain search after permanent living conditions, which are impossible in this material world."